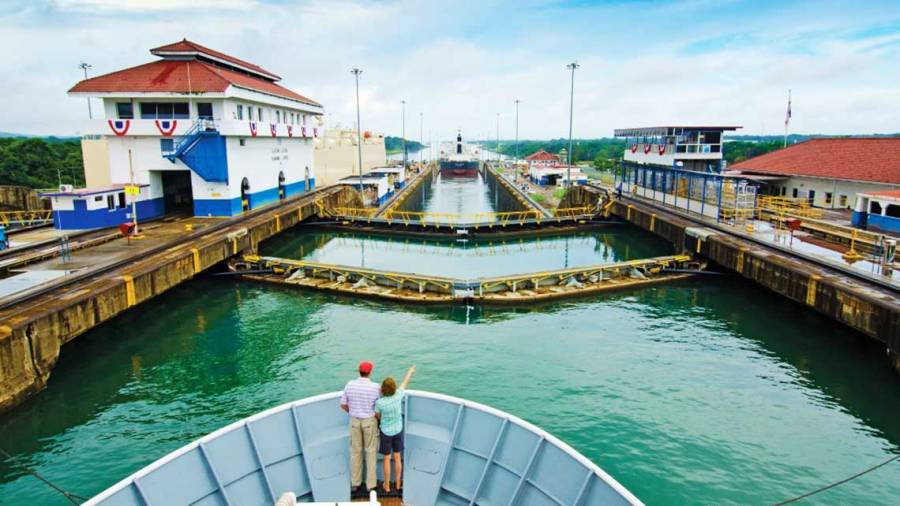 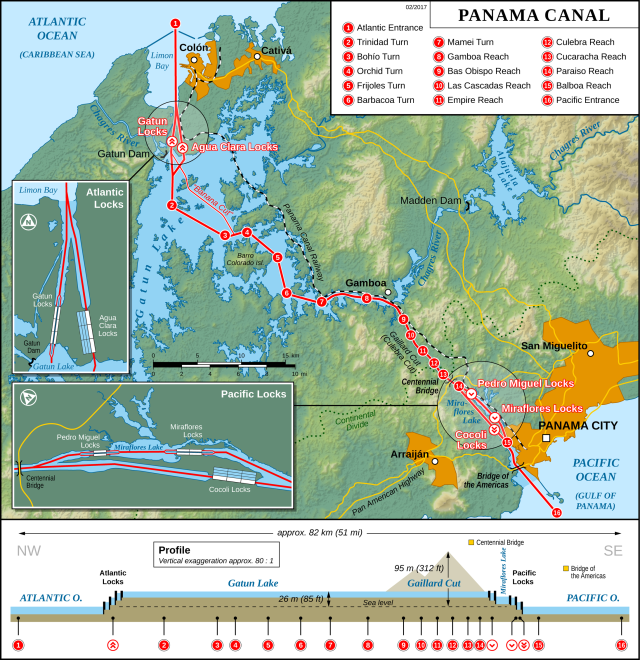 The Panama Canal, one of the Seven Wonders of the Modern World, is a man-made, 51-mile long cut through the Isthmus of Panama, connecting the Atlantic and Pacific Oceans and saving a 10,000 mile voyage around the continent of South America.

The transit of the Panama Canal is something that many travelers have on their bucket lists. But a transit of the Panama Canal is an unexpectedly riveting and unforgettable experience, far more captivating and beautiful than one imagines, and like the gorgeous coastlines of Costa Rica, should be seen from a smaller expedition vessel to appreciate the intimate details and diversity of the experience.

Orientation of sunrise and sunset can be confusing, as the country of Panama actually runs east to west and not north to south as is often imagined.

During most of a 9-hour transit of the Panama Canal cruise, you are cruising 85-feet above sea level between tropical hilltops that were flooded by the damming of the Sagres River.

The sights on a Panama Canal cruise are mind-blowing, and beautiful, but the most interesting part is certainly transiting the numerous lock systems. This is where you really want to be on a smaller ship, where you can watch the line-handling, the railroad “mules” hauling the ship, and the great floating doors winging shut. On a small ship you actually feel inside the locks themselves.

Leaving the Pacific Ocean’s Gulf of Panama, the National Geographic Quest navigates to the entrance of the Panama Canal. There, a local pilot boards to guide the ship’s transit through the Miraflore Locks. Electric locomotives, or “Mules” assist by pulling the ship to its destination in Gatun Lake.

During daytime transits, local entertainment, such as latin dances conducted on the sundeck are held. Guests get the chance to share a real cultural experience while they enjoyed tropical salsa music accompanied by a delicious fresh ceviche and a cocktail.

Seeing the Panama Canal, and the Panamanians running the waterway, is one of the most interesting feats to appreciate. You’ll also be able to see the new locks receiving Neo Panamax vessels carrying twice more cargo than the vessels over the original locks.

As the ship arrives in Gatun Lake, the ship stops at Barro Colorado Island. Surrounded by the fresh waters, Barro Colorado Island hosts a tropical rainforest hosting plentiful wildlife such as the howler and spider monkeys, agoutis, alligators and gaudy birds, to name just a few. Guests go ashore and hit the nature trails to experience it all.

After reboarding after a delightful hike, the ship descendeds the three chambers of the Gatun Locks 85 feet down to the Caribbean Sea.

As the Safari Voyager departs the Caribbean Sea and begins the journey through the Panama Canal, the Gatun Locks come into view. A local pilot boards to guide the ship through the locks. The ship raises 87 feet above sea level to the level of Gatun Lake, a artificial fresh water lake. The fresh water comes from the eight months of rain Panama receives every year. The process takes only eight minutes to fill those millions of gallons of fresh water.

There are three different “steps up,” or chambers, as they are properly called, within the Gatun Locks. In order to get to the other ocean, transiting the Panama Canal actually means going above the country, since much of Panama is at sea level.

Once at Gatun Lake level, the Panama Canal pilot and line handlers disembark. At night, the brightly lights of the locks fade, replaced by blinking green and red lights marking the channel to follow.

Further along the canal, the ship approaches the two sets of locks that lower the ship 87 feet back down to sea level, Pedro Miguel and Miraflores. Once again, a Canal Authority Pilot boards, and together with the assistance of line handlers, the ship is guided through the locks. The Panamanian employees are more than happy to provide insight into this intricate operations, and UnCruise supplements this learning experience with onboard narration and access to corresponding videos.

With a Granada cocktail in hand, you can cross off another item on your bucket list.